“As the commercial UAS industry continues to take flight in the U.S., we’re proud to participate in NASA’s UAS traffic management research and demonstrate the capabilities of Mission Insight as an enterprise-level, web-based workflow, data and user interface for UAS flight operations,” said Kevin Gallagher, president and CEO of Simulyze. “As the only UAS service supplier who has exercised with all build versions of NASA’s UAS traffic management software, we look forward to supporting the next research phases in TCL 3 and 4.”

During the exercise, Simulyze fielded two UAS Service Suppliers (USS) as well as USS web-based clients and extended the USS client enterprise capability it demonstrated in the previous TCL exercises to include a capability for a single client support for one vehicle operations as well as multiple and fleet operations from a single enterprise client.

In its research effort, Simulyze engineers added a number of capabilities to the USS, including a coordinated operation capability that allows for multiple vehicles that are working together to share airspace, which is essential to support operations with shared launch and recover locations. They also added a capability for a vehicle to pause operations without relinquishing or replanning its airspace use, which enables a series of flights to be conducted within one airspace reservation, such as flight durations that require a battery swap between sorties. This capability was also used if a vehicle had to land for an adjustment but could quickly be returned to its flight without requiring a replan or potentially losing the airspace reservation.

Working with ACUASI and NPUASTS, Simulyze demonstrated and tested simultaneous operations in close proximity. The USS and the overall UTM system were exercised under nominal and off nominal flight conditions and Simulyze successfully exercised interactions with operations that went outside of their flight volumes and/or data reporting timelines. The USS notified the violating operator and notified other operators in the area. Research was also conducted to provide ground based sense-and-avoid warnings of other aircraft. Simulyze engineers made a number of human factor updates to support operations so that UTM functions can be integrated into the flight sequence without impacting flight operations. Other human factor updates included providing pilots and operators with real-time audible and geospatial information to support safe flight operations.

Simulyze has a Space Act Agreement with NASA in support of its UTM that runs through December 2019. The company’s partnership with NASA’s Ames Research Center is focused on the research and development of a UTM system to enable and support safe and effective UAS operations.

Simulyze, Inc. is a leading provider of operational intelligence (OI) technology and applications that empower both federal and commercial organizations to make better, more strategic decisions in real-time. Built on its OI platform, Simulyze’s flagship product, Mission Insight™, is the industry’s leading commercial off-the-shelf (COTS) application that makes complete situational awareness easy to attain and easy to deploy. It processes and analyzes large streams of data from disparate sources to provide air, land and sea operators, commanders and managers with a common operating picture (COP) in a customized graphical interface. Since 2000, Simulyze’s OI technology has been deployed across numerous organizations worldwide, including the Department of Defense, the U.S. Intelligence Community, the Department of Homeland Security and commercial UAS applications. For more information, visit http://www.simulyze.com and follow on Twitter: @Simulyze. 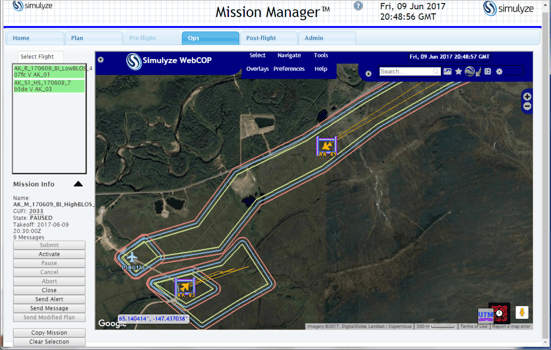 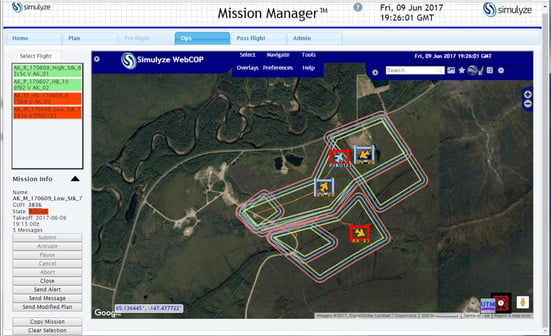 Image 2: NASA Technical Capability Level 2 National Campaign, Alaska UAS Test Site, June 9, 2017: Screenshot from Simulyze’s Mission Insight application shows four aircraft flying in close proximity, including beyond visual line of sight operations; two of four UAS are shown operating outside of their respective flight volumes, and notification is sent to the violating operator as well to other operators in the area.