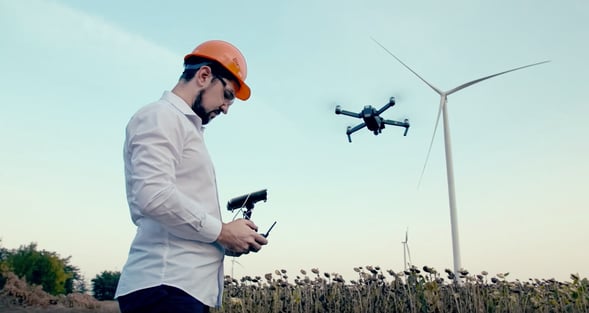 By now, we’ve all heard stories of how commercial drones (UAVs) have been adopted by numerous industries for everything from bridge and highway inspections to monitoring and tending agricultural crops.

But often overlooked is how drones can actually prevent accidents and injuries. Drones equipped with high-resolution cameras along with operational intelligence can actually save lives in numerous industries, particularly in hazardous conditions. They go where humans can’t (or shouldn’t) and they pinpoint potential safety problems faster and more efficiently without exposing workers to dangerous conditions. Dow Chemical, insurance companies like State Farm and AIG, and Total Safety, a global safety company, are among the firms receiving FAA approval for their drone plans, citing safety as the driver for their requests.

Here are three areas where commercial drones are helping to reduce workplace accidents and improve safety:

Construction: No question, drones are revolutionizing the construction industry, where, according to the Occupational Safety and Health Administration (OSHA), one in ten workers are injured each year—and up to 1,000 die each year from falls, exposure to toxic chemicals, vehicle collisions and electrical hazards. Now, instead of spending hundreds of man-hours walking dangerous construction sites, camera-equipped UAVs can make regular safety inspections in much less time; they can inspect the joints in scaffolding to make sure the pins are in place, for example, or determine if workers are following safety rules. One company is using drone mapping to conduct monthly safety inspections of landfills to spot possible leaks and soil erosion before the situation becomes dangerous to workers and the public. Drones equipped with thermal sensors are being used by chemical companies to check for hot spots in smokestacks that may indicate a failing panel.

Total Safety is also using the drones to inspect flare stacks, the disposal systems where gas from manufacturing or production processes is ignited and burned. These flares can stretch upwards by hundreds of feet and surpass 2,000 degrees. Conventional inspections of the flares usually require shutting down the plant for hours or days. But the drones allow the company to inspect the flares while they are operating. The drones’ sensors can also check emissions and make sure the flares are working properly.

Railroads: The rail industry has found drones solve multiple problems— from safeguarding against derailments arising from damaged or defective tracks to disrupting terrorist attacks. India suffered a terrible year in 2017 with hundreds of lives lost to derailments. Consequently, state-run Indian Railways has utilized camera-equipped drones to keep tabs on nearly 75,000 miles of tracks. The railroad network is so vast that regular manual track inspections are impractical and expensive. Drones will not only help in monitoring and maintenance of tracks but also in crowd control and relief provisioning during emergency situations.

Britain’s Rail Accident Investigation Branch (RAIB), which investigates the causes of rail accidents, has been using drones to capture high-quality images of incidents. Drones make it easier to access areas that are off-limits to helicopters, which the RAIB previously used in its investigations, due to their proximity to trees and overhead utility wires. The drones capture visual, thermal, and multispectral data and relay the information in real-time. This reduces the risks of unnecessarily sending people into dangerous accident sites and helps make rail transportation safer in the future.

Search and rescue: The value of using drones for search and rescue operations was proven in 2014 when an amateur pilot volunteered his drone to help find an 82-year-old missing ophthalmologist in Wisconsin. David Lesh, who used his drones to make videos for his ski and snowboard business, heard about the search from news reports, which had been ongoing for three days involving helicopters, search dogs and hundreds of volunteers trudging through a muddy field. Using his drone, Lesh located the missing man in just 20 minutes after scoping out a 200-acre field from the air.

Finding missing people is only half of the equation. Drones are now being used in the actual rescue of individuals and even delivering aid. Medical students have experimented to see if UAVs can reach accident scenes faster than an ambulance and deliver medical diagnostic devices like defibrillators or supplies to dress wounds and staunch bleeding. The drone could also be connected directly to medical personnel who could give audio instructions to bystanders, reducing wait times and increasing the chances of survival.

These are just some of the ways that UAVs are proving to be essential equipment for saving lives and improving safety.