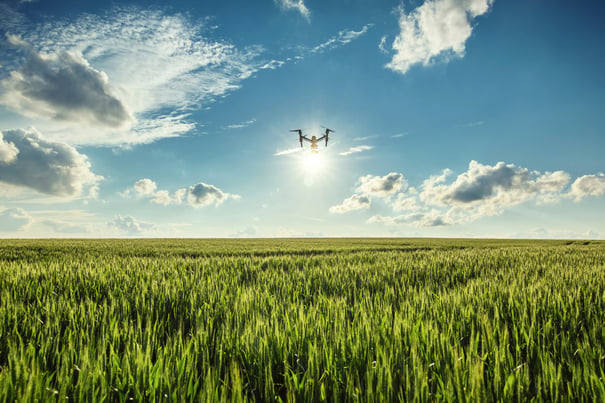 The next time you pick up a ripe tomato or ear of corn at the farmer’s market, you might be surprised to learn the high-tech journey that helped ensure they grew healthy and pest-free. Unmanned aircraft systems (UAS) are rapidly making a transition from the battlefield to the farmer’s field—helping growers oversee millions of acres throughout America and saving them big money in the process.

Much attention has gone to the use of drones for package delivery, however, there is a future for drones in precision agriculture. The UAS industry is rapidly evolving with major innovations in farming, and as a result, agricultural drones could soon change the way we farm altogether.

Drones Give Farming a Makeover

For centuries, farming was done by hand, with farmers walking the field and having an intimate view of their crops. But since then, machinery, computers and ground-based sensors have made crop monitoring and treatment more efficient. Today, satellites, manned planes and even walking the field are the main ways farmers monitor their crops. But these methods can be incomplete or time-consuming, particularly as acreage has increased in more recent years. Much could go unnoticed—issues that even a trained eye cannot detect, such as a nitrogen deficiency or diminished photosynthesis.

Farmers have long been left to guess about the health of their plants, but that won’t be the case for long. Agriculture drones are already flying across America’s farmlands, and their numbers could be rising soon. Precision technology has driven the farming revolution in recent years, and monitoring crops from the sky is driving the next.

With UAS, or drones, you can capture highly accurate images of an agricultural landscape, covering hundreds of acres in a single flight and without the cost and hassle of manned services. Drones can offer a far greater resolution than satellite imagery provides, even in the event of cloud cover. By using image processing software, farmers can transform these images into a map of their crops, which becomes the key to boosting yields, cutting costs and driving the business forward. These maps can highlight exactly which areas of crop need closer examination—meaning less time spent scouting, and more time treating plants in need.

Drones can be equipped with infrared cameras, sensors and other technology controlled by a pilot on the ground. They can collect data that helps to identify an insect problem, water issues, assess crop yields or even track down cattle that have wandered off. Infrared cameras could check crops for diseases that growers can then tackle more quickly than typical observation methods, which can take months to turn up. Farmers can recover the investment of UAS technology fairly soon, often within a year.

Drones can also be used to tailor the use of pesticides, herbicides, fertilizer and other applications based on how much is needed at a specific point in a field, saving the grower money from unnecessarily overusing resources, while at the same time reducing the amount of runoff that could flow into nearby rivers and streams.

Operational Intelligence and the Future of Precision Agriculture

Drones are making a dramatic impact in the efficacy of modern farming technology. The industry should expect many more eligible operators in the coming months, as well as many more drones surveying America’s fields. With the help of Operational Intelligence (OI) technology and applications offering real-time event monitoring and processing, farmers can further utilize drones to their best advantage by ensuring safety in the skies as the number of UAS increases.

However, uncertainty over how much flexibility the federal government has given agriculture to use the unmanned aircraft has long kept farmers from forging ahead with using the technology. Safety concerns from the Federal Aviation Administration (FAA) have been hindering the rapid deployment of UAS across various industries, including precision agriculture. Many farmers have felt that the lack of rules from the FAA is the biggest challenge for farmers eager to embrace the technology.

Fortunately, this June, the FAA announced a set of new rules and regulations that will allow the use of drones commercially, including for agricultural purposes. Now, if a farmer wishes to fly a drone over their farm for use in precision agriculture, these new rules make doing that much easier. The FAA has been making great strides in easing regulations, yet under the most recent rules, operators still cannot go past the pilot’s visual line of sight or fly above 400 feet, which can inhibit much of a farmer’s ability to take full advantage of the technology. Because of this and many other industries’ interest in drones, the FAA continues to be pressured to expand operational regulations.

Although the recent regulations are gradually making it easier for famers to utilize UAS technology, OI is increasingly important in speeding adoption. OI is necessary for the safe integration of UAS into the U.S. airspace and for continued evolution of FAA regulations. With weather tracking, aircraft tracking and vehicle telemetry data, drones can fly safely through our skies. OI technology and applications allow for smarter and better real-time decisions through intelligent insight. The technology will serve as a critical catalyst for pushing the FAA into lightening regulations and helping to safely integrate UAS into the national airspace. These steps will allow American farmers to stay ahead on modern, profitable techniques.

Or contact us to schedule a demo and learn more about Simulyze’s operational intelligence applications for UAS operations.