From Parcels to Pizza: Are Drones the Future of Delivery? 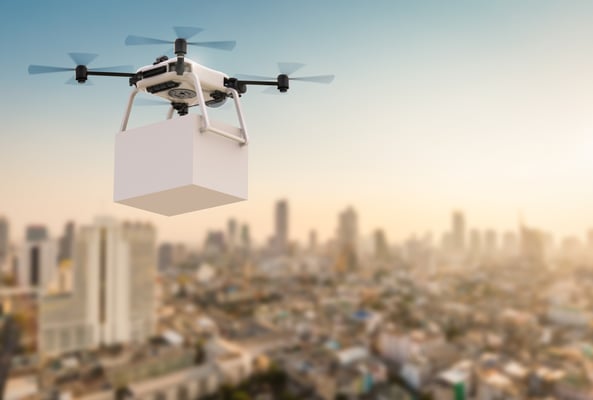 From medical supplies to pizzas to your Amazon packages, the idea of drone deliveries has captured the public's imagination and many companies want to be the first to offer regular drone delivery globally. However, because drone regulations are still holding companies back from pursuing that goal, is drone delivery as close to the horizon as it seems?

Yes, according to a 2016 Gartner report. It predicts widespread drone delivery by 2020. According to researcher Ivar Berntz, we’ll likely see at least three “Uber for drones” drone-sharing platforms able to broker arrangements between drones and companies to move goods.

In March of 2016, Flirtey, a Nevada-based startup, beat drone enthusiast company, Amazon, in delivering the first FAA-approved package to a residence via drone—as well as the first pizza delivery by drone in New Zealand! Their initial package delivery included bottled water, emergency food and a first aid kit to a residence in Nevada which marked the first fully autonomous urban flight.

Much like Flirtey, forward-thinkers are envisioning the benefit of autonomous delivery of medical supplies and disaster relief. Countless humanitarian organizations, for instance, have experimented with Unmanned Aircraft Systems (UAS) to deliver medical supplies in countries such as Malawi and Rwanda. They’ve also begun to utilize drones to revolutionize medical testing and treatment by delivering medical samples and test results.

In addition to medical supplies and the life-saving opportunities drone delivery can provide across the globe, UAS could also significantly transform the manufacturing and consumer goods industries for the better. One of the most obvious commercial applications for drones is autonomous delivery. Several major companies, from Walmart to Google to UPS, have requested permission from the FAA to test drone deliveries.

In 2015 for example, Amazon received permission from the FAA (with a special “experimental airworthiness certificate”) to begin testing their delivery drones in the U.S. By December 2016, the tech giant’s Prime Air initiative completed its first successful drone delivery. The package was transported to a customer and made it to their house in just 13 minutes after the order was placed.

Companies such as Amazon have been experimenting with UAS technology to deliver packages with incredible speed and precision in heavily populated areas. The potential to transform how companies ship products and the time it takes to receive them could revolutionize approaches to supply chain management. What’s more, the ability to receive an order with same-day service could forever change retail operations.

However, the FAA’s exemption to Amazon requires that the drones remain in line of sight of the pilot at all times. And operators must have a minimum of a private pilot’s certificate and current medical certification. Although restrictions like these may be necessary for initial testing, they could prevent the rollout of any scalable commercial operations if they remain in place, since they severely limit the use of autonomous drones over a meaningful distance.

Although autonomous distribution isn’t currently widespread, the opportunities are increasing so much so that CIOs at any logistics network-dependent company must consider its impacts, opportunities and potential to create new jobs. In order to soar above the competition, CIOs in consumer goods companies must prepare for the tipping point.

The benefits of drone technology for delivery can be augmented further with operational intelligence (OI). However, how quickly we begin to reap the benefits of drone delivery will depend heavily on the regulations set to monitor this technology. Simulyze’s Mission Insight technology can help businesses move forward while remaining compliant and ensuring safety in the national airspace. Built on their OI platform, Mission Insight provides the situational awareness needed to fly over heavily populated areas and rugged terrain. While the platform can help businesses, restrictions still need to be relaxed to expedite critical tasks like emergency medical supply delivery, or commercial applications, like record-breaking delivery times for Amazon package deliveries.

All in all, it certainly seems that clearer skies are ahead for humanitarian organizations and American businesses betting on drones. So, contact Simulyze today to schedule a demo and learn more about operational intelligence’s impact on the adoption of UAS in commercial applications.