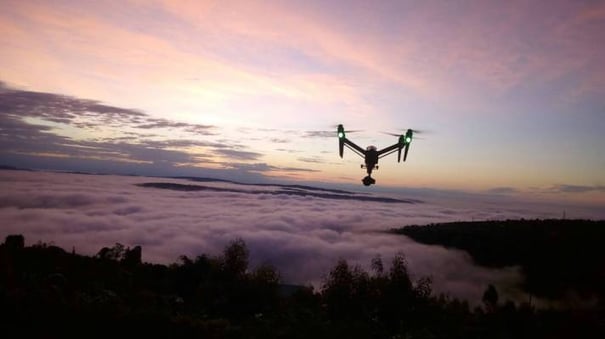 Remember that iconic opening scene in the 1965 film The Sound of Music? High above in a mountain meadow, Julie Andrews is seen walking in the field, first as a small dot, until the camera swoops in closer, closer, she twirls and suddenly she’s singing: “The hills are alive…”

It’s a bit of movie magic that looks effortless on screen – until you hear the story of how it was actually shot. A cameraman was strapped to the side of a large (expensive) helicopter. Large speakers were set up blasting the music, so Andrews could lip sync to the opening song, but the noise of the helicopter made that difficult. It took nine takes and many hours to get the shot, and each time the helicopter circled back, the prop wash threw Julie Andrews to the ground, making it necessary to fix her hair, makeup and clothing between each take.

It’s no surprise that many years later when ABC News recreated the scene for an anniversary program about the musical, it took them four takes in about 30 minutes. And there was no prop wash to mess up reporter Diane Sawyer’s hair.

That’s because instead of a helicopter, they used a drone.

Drone use in motion pictures is still in its infancy, but it has already changed the way movies are made. Beginning years ago, in movies like Skyfall, Pirates of the Caribbean: Dead Men Tell No Tales, and The Wolf of Wall Street, viewers saw aerial shots that were virtually impossible before drones. Sure, drones can get beautiful high aerial shots, but they can also follow the action under bridges, through an alley, down a canyon and even inside a building. Take a look at the hilarious novelty film Superman with a GoPro to get an idea of the many possibilities.

There are several reasons for the growing use of drones in Hollywood. First, of course, is the constantly improving technology that allows drones to fly in precise, stable patterns. "Drones are like a Steadicam that can operate 200 feet up in the air," said Michael Chambliss of the International Cinematographers Guild. “All of a sudden we can do shots that we couldn't do before."

Second is the dramatic improvements in small HD cameras that the drones carry. It’s only been a few years that cameras this small could produce the type of quality images that motion pictures demand.

Third, drones are so much safer than helicopters. In 2013 a chopper accident took three lives while filming a Discovery Channel reality TV show. Two years later, 10 died during filming for yet another reality show being shot in Argentina’s hard to reach places. Drones, said Ian Wolf, co-producer and unit production manager for Criminal Minds: Beyond Borders, are “easier, faster, quicker and safer.”

And that’s not even counting the difference in cost. Making a movie is all about time and money. Setting up aerial shots the conventional way required a helicopter and crew, or multiple cranes and operators, all of which took hours to set up and numerous takes. A two or three-man drone crew can be ready to go in minutes, and the cost difference is substantial, even for a mega-million-dollar blockbuster. A helicopter crew could run $25,000 a day or more, while a drone crew might cost as little as $5,000.

Drones are being used more and more for news and documentaries, giving viewers never before scenes of real-life events, like this incredible footage of an active volcano in Iceland.

Their ease of use, low cost and safe operation have combined to make drones an essential part of moviemaking. Chances are the next time you see an aerial scene in a movie and wonder, “How’d they do that,” the answer is probably with a drone.

Simulyze’s OI platform and applications provide UAS operators with real-time data insight that can be accessed from anywhere in any format, and offer a common operating picture (COP), which enables well-informed decisions and the safe integration of UAS into the nation’s airspace. OI integrates and visualizes all aspects of multiple flight operations into a single interface to help operators plan and carry out missions safely amongst fellow unmanned and manned aircraft.