The Sky’s the Limit with Drone-assisted Mapping 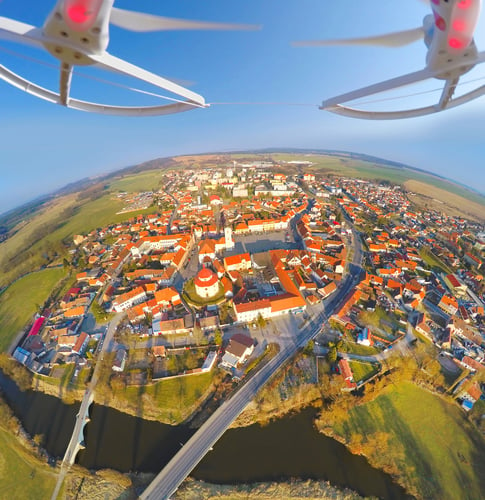 Today, with the help of new mapping apps, aerial imagery specialists are enabling companies and individuals to create on-demand maps from drone imagery. This has increased the integrity of plans for construction sites and similar applications. Mapping apps are also helping revolutionize mining, archaeology, environmental and humanitarian efforts, as well. The sky is really the limit with drone mapping, you could say.

Better Maps Are Just a Drone Flight Away

The U.S. military first used flight-aided mapping to locate mines in war zones. Aerial imagery specialists helped to build plane-based systems to map them, but this undertaking was far from inexpensive. Even as recent as 2013, similar systems cost the military and its contractors millions of dollars. This inspired the idea for mapping by UAS.

Since 2013, a wide range of customers and commercial businesses, like the TV and film industry, has been able to buy or rent UASs to take photos and videos. This also allowed aerial imagery specialists to go through the software process and pull together individual images taken from different points from above and create a unified map with the help of cloud-based software tools.

Drones are ideal for aerial mapping. Recurring, accurate flight makes drones with operational intelligence (OI) technology the ideal workflow, data aggregation and processing platform for precision mapping. OI technology in UAS is vital to help pilots aggregate vast amounts of both structured and unstructured data in a central location and gain real-time visibility of information. The combination of today’s high-resolution cameras and inexpensive flying devices enables mapping at levels of detail never before possible. In addition, UAS is much more cost-effective, as conventional methods like using an airplane or helicopter can cost thousands of dollars.

Services like Maps Made Easy by the UAS sales company Drones Made Easy or Pix4Dcapture offer mapping capabilities in the form of an app. These apps and several others have found an audience among land surveyors as well as hobbyists. Unlike Google Maps, for instance, where the images tend to be at least a couple of years old and lack the resolution to collect precise data, drones can produce up-to-date maps with a resolution up to 20 times better than that of Google Earth.

The data collection techniques that these apps enable are some of the most important factors in creating a great map. A lot of factors go into collecting imagery with sufficient overlap and quality to be used in three-dimensional image reconstruction, as well. OI technology provides the ability to easily define a mapping flight plan around the area of interest when users set out to create a map. Customers can then customize things like flight altitude, image overlap or camera angles for optimal results using the app. These apps even offer specialized tools for more complex missions and more manual control.

For example, archeologists across the globe are using UASs and mapping applications to protect historic sites. With cutting-edge methods available to create up-to-date and accurate digital maps of archaeological sites, users can identify future excavation locations and defend and explore endangered and ancient treasures. Drones can provide a bird’s-eye view of these ruins and allow researchers to create three-dimensional images and detailed maps at the same time.

UAS mapping apps have even helped revolutionize mining in Mexico at a prehistoric archeological site called Paquimé, for instance, that hadn’t been mapped since a 1950s hand drawing. And they are preserving Peru’s cultural heritage by mapping, monitoring and safeguarding its ancient treasures on the ancient hilltop ruins in Chepen.

Drone technology has emerged as the next big game changer in the field of environmental conservation and disaster relief, with experts welcoming the rise of drone mapping. Because drones can access very hard-to-reach sites while causing very minimal impact, researchers can employ UAS mapping to monitor everything from the polar ice melt to determining animal migration patterns. They can take researchers into remote areas where they can capture incredible, high-quality images of the landscape and wildlife. Using OI and other tools, researchers are able to create a flight plan, then put together a comprehensive map with the photos taken by drones using high-tech software. They can even generate three-dimensional computer models of the area, which provide a wealth of information.

Mapping apps can also be used widely for environmental research and wildlife preservation. They are managing agricultural lands and national parks, tracking wildlife in remote areas, observing the effects of climate change and monitoring the biodiversity of fragile ecosystems from oceans to rainforests.

Drone mapping has provided a low-impact way to study delicate ecosystems. In one instance, drones have taken researchers to the Seychelles archipelago off of East Africa and helped researchers map out a protected coral reef and lagoon. They were able to count the sharks and turtles inhabiting the atoll and measure the physical changes of shifting sands. The maps made with the drones provided a higher resolution and a clearer view than a satellite could, yet the project was still less expensive than employing traditional methods.

It wasn’t long ago that drones and UASs were considered purely a part of military missions, but they are now being used more widely to perform other tasks in a vast array of commercial and public industries. Mapping apps for drones enable customers to gain a new perspective on their environment with accurate, high-resolution imagery that they can control themselves. These mapping applications have made drones even more invaluable to military operations, as well as a plethora of other industries.

While more and more people are buying their own drones to take pictures, it’s the ability to more effectively collect data and combine those images to create more accurate maps that is truly transforming the technology. UASs and mapping apps help industry experts gain faster data, at a higher resolution and at a far cheaper price than ever before.

Because this is a less costly, more efficient and more precise method compared to traditional approaches, employing drones for map making is an ideal process that has been gaining considerable momentum. A buzz of excitement continues to surround drones, and their potential as a new method for collecting highly detailed imagery and other significant data—better mapping capabilities are just the beginning.