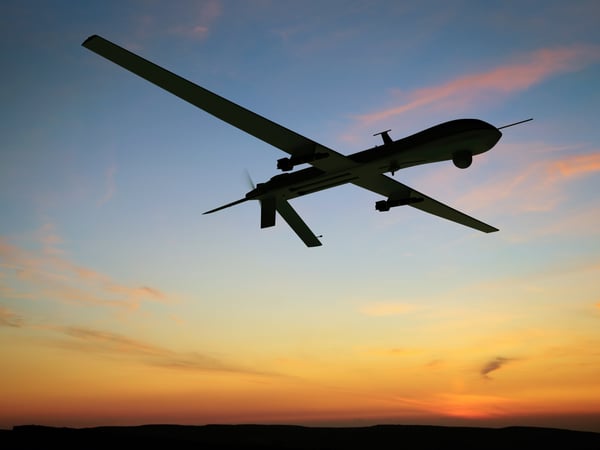 Before the commercial drone industry boom of today, drones were primarily utilized by military and defense operations. One of the biggest revolutions in the past two decades of warfare has been the rise of drones, or unmanned aircraft systems (UAS), that can do everything from conduct airstrikes to disable roadside bombs.While drones grow in popularity across other industries, unmanned systems continue to make a dramatic impact on military deployments. The benefits are wide-ranging, including the drones themselves and the technology enabling data integration for operators.

Drone Technology is Set to Revolutionize Military and Defense Operations

Beginning with Israel’s foray into unmanned intelligence surveillance and reconnaissance (ISR) missions, the industry has evolved into UAS that can travel farther and longer alongside heightened communications. These technical advancements have expanded UAS’s utility in military applications. The benefits of UAS technology include:

There has been a lot of discussion concerning North Korea and U.S. missile defense. North Korea has captured the world’s undivided attention as Kim Jong-Un’s regime continues to blast missiles out to sea. Today, on the Korean peninsula, the United States Department of Defense (DoD) is working to manage situational awareness while monitoring threats from North Korea.

In particular, at the United States’ 35th Air Defense Artillery Brigade headquarters in South Korea, teams of soldiers work 24/7 to provide real-time surveillance of the ballistic missile threat. These soldiers play a vital role in monitoring and receiving information to ensure U.S. missile defense is ready for any situation.

In current military zones, keeping personnel safe during complex missions is a top priority. Utilizing UAS technology can eliminate the need to send them directly into conflict-ridden situations by flying over areas of interest, collecting essential surveillance and relaying the data back to the command center.

Through applications that run on OI technology, command forces can gain situational awareness through a COP that shows details of the area by collecting and integrating various data sources. With this information, military units can create a plan of action to better identify targets, protect infrastructures, improve safety and even record the mission for training after the operation has concluded.

A robust UAS system can prioritize data such as live GPS coordinates, mission data, weather conditions, video and other sources to allow communication to be transmitted in remote areas. These advanced processing methods provide both deployed personnel and mission control with crucial information needed to make time-sensitive decisions. The U.S. military is even exploring autonomous UAS technology that can operate without GPS data.

Although it’s early in the development stages, missions that are considered too dangerous or complex for humans may soon be delegated to autonomous drones, which can go into harm’s way without any risk to military personnel and can make intelligent decisions significantly faster.

Schedule a demo with Simulyze today to learn how operational intelligence applications provide a foundation for actionable insights in military and defense UAS operations.