Coming to a Sky Near You: How Drones Are Transforming the Way Directors Make Movies 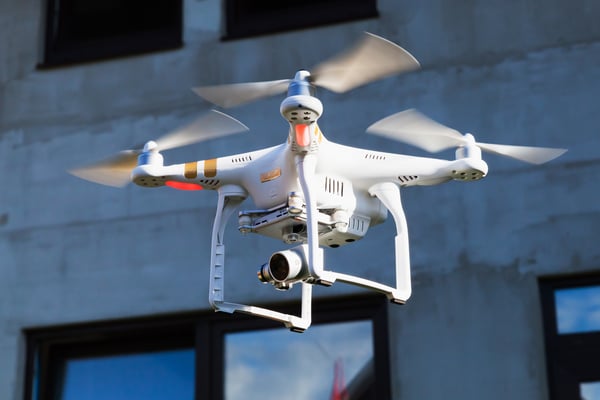 Not only for sports and news coverage, commercial drones are now increasingly being used for another relatively new frontier: film making. Aerial filming in movie production can provide audiences with more spectacular views than ever before. Now, celebrated television series and Oscar winning films are being captured with the help of this exciting, yet controversial new technology.

Hollywood vs. the FAA

Although Hollywood has known about the potential for aerial shots using drones, up until 2012 when Section 333 was passed by the Federal Aviation Administration (FAA), the U.S. had a blanket ban on using any drones for commercial purposes. This meant filmmakers couldn’t utilize the technology until recently.

It’s been a little over two years since the FAA fully cleared the way for drone use by the film and television industry, and unmanned aircraft systems (UAS) are now becoming increasingly popular tools for directors and cinematographers. While drones and filmmaking is still in its infancy, demand is growing rapidly on production sets because they allow for more nimble camerawork.

The 2014 announcement was a significant milestone in broadening commercial UAS use, while ensuring the utmost safety in all forms of flight. Directors and cinematographers are still in the beginnings of capitalizing on the aesthetic potential of this new technology. However, there has been some pretty incredible footage captured using drones ever since Hollywood got the go-ahead, and they haven’t hesitated to take full advantage.

Although productions like “Skyfall” and the Harry Potter movies had already been using camera-mounted drones for aerial shots, the filming had been in other countries that have less rigorous restrictions. But after the FAA gave the green light for drone use on the set of movies and TV shows, the first U.S.-based production to use drones was “The Mentalist,” shot that December. Other projects that have used UAS include “Avengers: Age of Ultron” and HBO’s “The Leftovers.”

On a recent Atlanta-based production for “Transformers: Dark of the Moon,” the director found that when using a drone specialist production company, they were able to work with the FAA and find a way to get the shot they needed without breaking the bank. During production, for example, the supervising location manager was able to secure permission to fly a drone through the center archway of the central government building in Hong Kong, which wouldn’t have been possible with a manned flight or helicopter.

In a more recent example, the Oscar-nominated film, “Lion,” staring Nicole Kidman and Dev Patel, used drones to film vast landscape scenes over India and Australia. With a smaller budget, the crew needed to find creative ways to film sprawling scenes. They ended up using cameras on drone rigs for aerial shots in India. Another magnificent part of the film was captured with drones over Bruny Island, one of Tasmania’s most beautifully preserved natural environments, with abundant wildlife and stunning cliff-top views.

Debates aside, it’s evident that drones are transforming the art of filmmaking, and they are providing audiences with viewing experiences like never before—and it doesn’t look like it will be slowing down anytime soon.

The great benefits of drones in the film industry can be expanded even further with Simulyze’s Operational Intelligence (OI) platform. Pre- and post-production planning native to OI applications for UAS, including incorporating weather forecasts, maps and topography of the local area and other data, can help directors and producers ensure filming is a breeze.

Contact us today to schedule a demo and to learn more about Operational Intelligence’s impact on the adoption of UAS in commercial applications like filmmaking.